There are two traditional ways of storing data: online storage and offline storage.

Online storage means that the storage device and the stored data are kept "online" at all times, which can be read by users at will and meet the speed requirements of the computing platform for data access. Just like the disk storage mode commonly used in PCs. Generally, online storage devices are storage devices such as disks and disk arrays, which are relatively expensive but have good performance.

The so-called near store (nearstore) is a concept proposed with the refinement of the customer storage environment. The so-called near store is relatively extensive in extension, and is mainly located in the application between the customer's online storage and offline storage. It refers to storing data that is not frequently used, or that data access is not large, on a storage device with low performance. But at the same time, the requirements for these devices are fast addressing and high transmission rate. (For example, the archiving of some long-term unused files of customers). Therefore, near-line storage has relatively low performance requirements, but requires relatively good access performance. At the same time, in most cases, the unused data accounts for a relatively large proportion of the total data volume, which requires that the near-line storage devices require relatively large capacity.

Offline storage is a backup of online storage data to prevent possible data disasters. The data stored offline is not often called, and is generally far away from the system application, so people use "offline" to describe this storage method vividly. 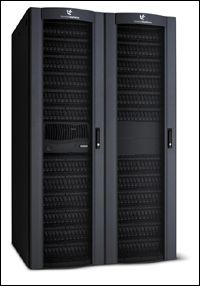